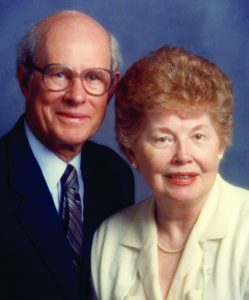 National College of Natural Medicine announced a $1.06 million bequest from the estate of Adrienne and Percy Frazier of Missoula, Mont., at a meeting of the college’s board of directors in late February. The gift, the largest bequest in NCNM’s 58-year history, will be used to establish the Adrienne and Percy Frazier Endowed Scholarship fund, a need-based program for both naturopathic and Chinese medicine students.

Percy Frazier Jr. passed away Feb. 15, 2006, at the age of 94; Adrienne Frazier died Sept. 5, 2011; she was also 94. Both Fraziers served in the U.S. Armed Forces during World War II. Percy Frazier published books and stories, and was active in the Rotarians for much of his life. Adrienne Frazier taught interior decorating in the Home Economics Department at the University of Montana. The Fraziers were well-known philanthropists in their hometown of Missoula.

Adrienne and Percy Frazier were grateful patients of Dr. Christine White, a well-known naturopathic physician in Missoula who graduated from NCNM in 2001 and completed a residency before going on to private practice in family medicine (see “NCNM Receives Record $1 Million Bequest” on page 10). White is a past president and member of the Montana Association of Naturopathic Physicians, the American Association of Naturopathic Physicians, the American Botanical Council, and the American College for the Advancement in Medicine.

NCNM Vice President of Advancement, Susan K. Hunter, noted that the Frazier Endowed Scholarship will be a great help to scores of students who will benefit from the financial assistance the gift will provide.

“Mrs. Frazier was very specific that her family’s investment in NCNM be used toward helping disadvantaged students. The Percy and Adrienne Frazier Scholarship will empower students to realize their dream of completing their education to become natural medicine practitioners. The memory of their generosity will grace NCNM students for years to come,” Hunter said.

Adrienne Frazier was an ardent fan of natural medicine. “Mrs. Frazier’s support of naturopathic and Chinese medicine was significant,” Hunter said. “She endorsed natural medicine with such devotion that one would almost imagine that she had been an NCNM alumna! It is our hope that the Fraziers would be pleased to know that their generosity to NCNM is a gift that will grow and continue to sustain our medical students for years to come.” n