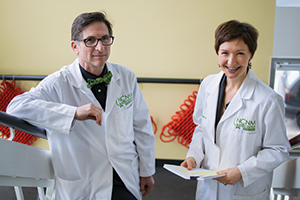 In the “Case of the Perpetual Patient,” published in the March 2011 issue of the Naturopathic Doctor News & Review, National College of Natural Medicine researchers Dr. Steven Sandberg-Lewis (’78) and Dr. Allison Siebecker (’05) describe a young woman literally tortured by gastrointestinal ailments.

Painful gut, chronic heartburn and frequent diarrhea that traded off with constipation. The patient also suffered from adult acne, fatigue, restless leg syndrome, and not surprisingly, found it nearly impossible to sleep.

Worst of all, wrote Sandberg-Lewis and Siebecker, the patient had been suffering for years as she passed through the offices of multiple medical doctors, acupuncturists and naturopathic doctors, to no avail.

Doing their best imitation of Sherlock Holmes and Dr. Watson, the pair got to work, with strong clues given by the symptoms. Next, the pair conducted a three-hour lactulose breath test, which revealed what they had suspected. The culprit: Small Intestine Bacteria Overgrowth… also known as SIBO.

A condition that affects up to 20 percent of Americans and 40 percent of all gastrointestinal patients, according to Sandberg-Lewis, SIBO is an underlying cause of Irritable Bowel Syndrome. It has also been associated with fibromyalgia, Crohn’s disease, even depression and diabetes. It basically involves the overgrowth of bacteria in the small intestine. The small intestine normally harbors some good bugs, but far less than the large intestine, which is a complex stew of bacteria, both beneficial and opportunistic.

Chronic stress, an acute GI infection or GI surgery may disrupt the complex interplay between the intestines, allowing bacteria that are normally destroyed in the digestive process or flushed from the small intestine to build up. The flourishing organisms then produce an overabundance of hydrogen and methane leading to SIBO symptoms.

The good news for SIBO sufferers is that a combination of conventional antibiotics, herbal medicines and diet overgrowth, providing relief from symptoms and time for the body to heal. The “Perpetual Patient,” for instance, saw her pain and GI symptoms dissipate early in the treatment. Her acne improved and she experienced a marked uptick in energy. Other issues like restless leg, insomnia and constipation took longer to improve, but were eventually resolved, leaving the patient “amazed and very pleased.” Her long ordeal was over.

In the meantime, Siebecker and Sandberg-Lewis have become leading authorities on SIBO and its treatments. Recognizing the need for additional research into causes and treatment, Sandberg-Lewis and Siebecker played key roles in establishing NCNM’s SIBO Center for Digestive Health. The center, which includes Dr. Melanie Keller and Dr. Lisa Shaver, often gets the tough cases MDs and other NDs can’t solve. The goal, said Sandberg-Lewis, is first to help SIBO patients get better. Center clinicians are also working to strengthen research into SIBO-related therapies and provide lab testing for SIBO, IBS and related conditions. Also key is educating healthcare providers and patients. Siebecker does numerous interviews and lectures about SIBO.

“So many people are very sick from SIBO and don’t have a diagnosis,” said Sandberg-Lewis. “It can go on for decades.” He added that patients frequently get drugs to treat the symptoms of IBS, which often aren’t effective and do nothing to address the underlying causes. “Patients often feel like they’re crazy and they suffer a lot,” he said.

Naturopathy and The Link To The SIBO Puzzle 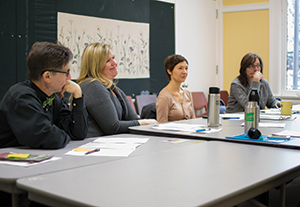 However, he’s not surprised at the progress NCNM doctors and other NDs around the country are showing because “a link between GI and systemic issues is really a central naturopathic concept.”

Sandberg-Lewis has been interested in gastrointestinal health for a long time. He has taught a class on the subject through much of his time at NCNM and shadowed two gastroenterologists at Oregon Health & Science University 18 years ago.

It was Siebecker, though, who really got the ball rolling at NCNM around 2009 when she re-read a book from her time as a student in Sandberg-Lewis’ gastroenterology class. The book, Breaking the Vicious Cycle, by Dr. Elaine Gottschall, describes SIBO symptoms without actually naming them. Importantly, it also describes a diet that has been effective in reducing the troublesome SIBO bacteria.

“Allison was really excited,” about the book and was passionate about learning more about SIBO, recalled Sandberg-Lewis. After Siebecker spent six months of intensive research, the pair began meeting and working together on SIBO. Meanwhile Siebecker continued to do research, which was then applied successfully in Sandberg- Lewis’ practice with his patients. As Siebecker returned to private practice, the two doctors brought others into the discussion, including faculty member Dr. Lisa Shaver and student Dee Saunders. Eventually, a proposal went to NCNM’s administration about forming a center, somewhat along the lines of the college’s successful cardiovascular center. The proposal was approved and NCNM’s SIBO Center set up in existing clinical and office space.

“SSL,” as students affectionately call Sandberg-Lewis, and Siebecker have proven to be a formidable team, and have scored best paper honors twice for their SIBO work in the Townsend Letter as well as a January 2013 NDNR article that was the journal’s most popular ever. 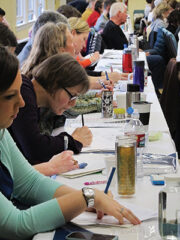 The center’s biggest triumph, however, occurred earlier this year as Siebecker, who serves as the center’s volunteer medical director, led the coordination of an international SIBO symposium at NCNM. She picked and secured the speakers, created the symposium curriculum, and exhaustively promoted it—ably assisted by Karylin Elroy, SIBO Center coordinator. The conference was the most popular continuing education event ever held by the college, drawing some of the world’s top SIBO and GI experts. Some 225 people were in attendance, with another 300 participating over the Internet, said Sandberg-Lewis.

Among the highlights: a Delphi Panel put together by Saunders. Modeled after similar gatherings in ancient Rome, NCNM’s panel included a three-hour private meeting of the SIBO experts—for the first time in the same room—who discussed diagnosis, treatment and research. Saunders is working on a paper based on the panel’s findings, and another SIBO seminar is planned for next year.

Siebecker, who gained relief from her own SIBO problem, largely through one of the dietary approaches that restricts certain carbohydrates, is still fired up about helping others after re-discovering the Gottschall book from Sandberg-Lewis’ class years ago.

“I’m so thankful to him for that,” she said, “It was so amazing to me that a book like that was put on the recommended reading list for a gastroenterology class, at a medical school! That’s pretty unique.”

In turn, Sandberg-Lewis credits Siebecker’s energy and enthusiasm to discover all there is to know about SIBO as a key to the center’s progress. All the excitement about researching and teaching SIBO at NCNM has him energized and focused to help it grow. In addition to teaching students, Sandberg-Lewis says that high on the SIBO Center’s agenda are the future creation of a two-year residency, better tests and the development of unique products for treatment.

Both doctors are thrilled that at long last there is help for people who previously have had few answers for this debilitating problem.

“I have never been so organized in my life as I have been with this,” Sandberg-Lewis said. “It’s very exciting work.”