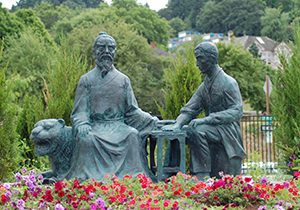 PORTLAND, Ore. (May 14, 2015)—The National College of Natural Medicine (NCNM) will introduce its newest degree program in fall 2015, the Doctor of Science in Chinese Medicine (DSOM). The DSOM is an accredited, four-year professional doctoral program that integrates modern biomedical science into a comprehensive framework of ancient Chinese medical science and philosophy to achieve enhanced clinical outcomes for practitioners and patients. This is the first doctoral-level classical Chinese medicine degree offered by the college and one of the first of its kind in North America.

NCNM has been expanding its programmatic offerings to add to its flagship programs in naturopathic medicine and classical Chinese medicine in recent years by launching two undergraduate degrees and master’s programs in integrative mental health, global health, nutrition, and integrative medicine research—growing its enrollment 33% since 2007. The college’s School of Classical Chinese Medicine has offered a Master of Science in Chinese Medicine (MSOM) program since 1995.

Provost and Vice President of Academic Affairs, Andrea C. Smith, EdD, observed that NCNM’s new program is one of the most comprehensive and unique programs of its type in the world. Said Smith: “NCNM’s School of Classical Chinese Medicine was founded to cultivate Chinese medicine clinicians and scholars steeped in the deep wisdom and knowledge codified in ancient medical texts of revered physicians, such as Sun Simiao and Huangdi—knowledge that was nearly lost to the practitioners of today. We are deeply indebted to the School’s founding professor, Heiner Fruehauf, PhD, and Dean Laurie Regan, PhD, and our renowned faculty, through whose efforts NCNM is fanning the embers of passion once again for the ancient practice of Chinese medicine—to the benefit of patients throughout the U.S.”

The DSOM is designed to provide students a solid foundation in Chinese medicine theory through an appreciation of the original language of the ancient, classical Chinese medical texts. These texts provide the foundation for training within a broad spectrum of Chinese medicine modalities, including acupuncture and herbal medicine. A strong focus of the DSOM program is the integration of CCM with biomedicine, training practitioners to develop the capacity to communicate, educate and collaborate within the larger system of healthcare.

Smith noted that the college’s classical Chinese medicine students are mentored by some of the world’s leading scholars. Smith said, “We encourage a deep and sustained exchange of inquiry in the classroom that assists our students as they learn to bridge and communicate Eastern and Western ways of understanding health and disease. Upon completion of the DSOM program, our students are prepared to more fully communicate and collaborate with their Western medical colleagues and achieve successful clinical outcomes for their patients.”

Visit the NCNM website to learn more about NCNM’s new Doctor of Science in Chinese Medicine program or to see a short video about its School of Classical Chinese Medicine.