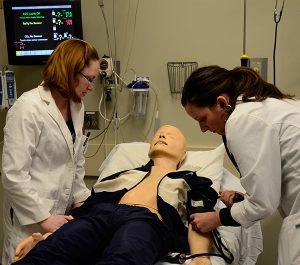 The patient is a 50-year-old male named Edward. His chief complaint upon entering the clinic is a feeling of pressure in his chest. As the secondary student takes his blood pressure and checks his vitals, the primary student takes a medical history of Edward’s presenting illness. Edward suddenly announces that he is having difficulty breathing. He is also having pain in his chest. The pace quickens in the examining room.

“Give me something for this pain,” he demands, “Make it snappy! The pain is getting worse!” The primary gives him nitroglycerine and then aspirin. Minutes later, Edward’s heart begins to fail. The secondary, Brielle Dickey, delivers oxygen as Danielle Currey, the primary, applies CPR. Currey is visibly sweating as a call is made for an ambulance. Edward ultimately pulls through. Currey and Dickey—two naturopathic medicine students—just saved his life. A voice is heard on an intercom overhead.

“Nice work. OK, let’s head back into the classroom.”

“Edward” is a high-fidelity mannequin. The “clinic” is a teaching lab at Legacy Emanuel Hospital in northeast Portland. “That was CRAZY!” Currey says, High-Fidelity Learning laughing as she leaves the Sim Lab and heads back to her desk to watch a video of herself “treating” her first acute care case. 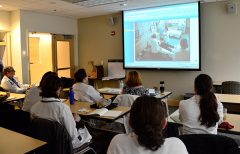 When NCNM awarded him a sabbatical in 2012, Dr. Barrett was accepted into a program for educators in health professions held at the Harvard Macy Institute in Cambridge, Mass. It was there that he experienced firsthand the power of experiential learning through a case-based simulated healthcare setting. “Simulated learning is one of the most compelling innovations of medical education,” Barrett explains.

“Medical schools like Harvard and Stanford are the leaders in simulated medical education. Their students can read about a heart attack, and instead of heading to the library to learn more, they’ll say, ‘Let’s do a Sim,’ and contact an on-call Sim Lab faculty member who will run the case that they want to study.”

Barrett adds that NCNM naturopathic administrators and faculty were discussing a curriculum re-design prior to his sabbatical. When he returned from his stint at Harvard, Barrett discovered that Dr. Melanie Henriksen (now the dean of the School of Naturopathic Medicine) and Dr. Margot Longenecker (former dean of the School of Naturopathic Medicine) were independently also looking into simulated learning, and had established a connection with the Clinical Education Center at Legacy Emanuel. Adult learning theory suggests that learning occurs in sequential steps of cognitive analysis and integration, Barrett explains. “The highest level of learning happens when students are given the opportunity to synthesize the information they’ve received—for example, comparing and contrasting different patient presentations while they perform at an almost professional level.” He adds, “Studies show that hands-on learning helps bridge the gap between cognitive understanding and putting that knowledge into action.”

Simulation is not new for NCNM. Dummies are used in CPR classes, and NCNM faculty members sometimes use mannequins to teach intubation. However, simulation hasn’t been a consistent part of the ND program. Barrett notes that there are missing links in the naturopathic students’ learning cycle. Students need a leg-up to smoothly make the transition from classroom to clinic.

“Students experience didactic learning and case-based learning involving diagnosis and treatment in their first two years, but the learning doesn’t always translate into application as the students get into the clinic in their third and fourth year,” he says, adding that he’s seen outstanding naturopathic scholars stumble when it comes time to apply what they’ve learned in the classroom with a clinical patient. “Not everyone can make that transition.”

For those who are successful in clinic, Barrett notes that only a few have the opportunity to experience treating patients with acute medical conditions. “They may never have a chance to see a patient with a collapsed lung or an asthma attack. They may miss appendicitis if they haven’t seen it in their clinical training.”

Exposure to acute cases isn’t unique to NCNM. According to Barrett, “This happens in conventional medical schools, as well. Medical students may never have a chance to see myocardial infarction in their clinical training,” It’s common enough though, that they’ll see it at some point in their careers if they’re practicing as primary care providers.

“Doesn’t it make sense,” Barrett asks, “that we would at least give them simulated training in acute illnesses, where they’ll learn when to give patients oxygen, remember to give aspirin or nitroglycerin, know when to apply CPR? It’s like flight simulator school. Student pilots learn to fly without fear of crashing. No one dies in Sim Lab. It’s very real, it’s very engaging, and it’s safe.”

From Theory to Practice 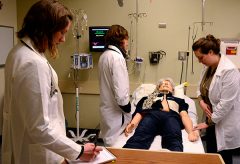 Legacy Emanuel’s Clinical Education Center is located in the lower-level of the hospital’s administrative and medical office building. As you enter the wing, you might do a double-take as you pass a room stuffed with people on gurneys, sitting in wheelchairs, and babies in medical beds. Then you realize that the “people” are lifelike, but not real.

They’re high-fidelity mannequins, computerized and programmed to provide a case-based clinical training experience that is amazingly realistic. They breathe, their abdomens rise and fall, you can feel their pulses, their carotid arteries, they can blink—and they talk. Sometimes insistently, like Sharon, a 60-year-old Type 2 diabetic, who presented with stomach pain—and was clearly impatient for help from a small group of NCNM students, including Renae Rogers, the primary assigned to Sharon’s “case.”

In another room, observing the students as they treated Sharon, were Barrett and nurses Martino and Crawford. They sit at the computer that operates the mannequin. But the computer controls much more than that. It shows the instructors which medications the patient receives and how much. The computer can tell them if CPR is being performed too slowly or too fast. It controls Sharon’s breathing, her heart rate. Together, they were the silent force behind Sharon’s ailing heart. “It’s really fun,” says Barrett, laughing. “You feel like you’re the Wizard of Oz behind the curtain! Except you get to push the ventricular fibrillation up a bit so the BP starts to decrease and the pulse is scrambled—all of a sudden the students are hustling.”

Martino, perhaps a performer at heart, was Sharon’s mouthpiece, using an intercom to speak to the group as Sharon—by turns whiney and petulant, then anxious and frightened. Within minutes, Sharon’s condition worsened and her mounting fear and anxiety quickly moved the medical team from awkward self-consciousness to action.

As the adrenaline pumped, the group became fully engaged and present. “When we started, we were so nervous! At first, all I could think was, ‘I better be at the top of my game,’” Rogers admits. “As Sharon’s pain worsened, we quickly began thinking through what wasn’t working and what we needed to do. It helped to watch Currey and Dickey and their group go first!”

Earlier, Rogers joined a small group of NCNM students in a room adjacent to the Sim Lab, riveted to what they saw onscreen—streaming video installed in the Lab captured all the action as Currey, Dickey and two other students worked to save a life.

The video was taped and played back for each set of students, enabling them to observe and self-evaluate their performance while receiving supportive feedback from their instructors. “I felt like my clinical thinking was a little slow as we narrowed down where we were with the patient and where we needed to go,” Rogers says of the experience. “But looking at the video, we could understand what we missed, where we had openings we could have taken to help the patient sooner.”

Rogers adds that their medical instructors were helpful with their observations and suggestions during the playback of the videos. “They were so encouraging and supportive. Getting that kind of direct, focused feedback is such a great opportunity—oftentimes on a shift, the doctors are overseeing six or more students at a time. So this was really useful.”

All three students, Rogers, Currey and Dickey, agreed that moving from a theoretical, cognitive understanding to active learning in the Sim Lab accelerated their understanding and built up their confidence. Currey points out, “You can read indefinitely about how to do something, but nothing is like having hands-on experience, with your adrenaline rushing—along with the memory of how you handled it.”

Currey, who was the first NCNM primary to experience simulated learning by practicing with Edward, remembers that, “We were all a little flustered. I wasn’t expecting to get hit with cardiac arrest right out of the gate! I thought about how I could have done things differently and kind of beat myself up. But then as I watched (the video) I realized I was OK, I was actually on the right track” She adds, “I’d love to have more time to progress through different cases in Sim Lab. Rogers agrees: “I have more comfort now about slowing down with a patient, of being in the moment. It was invaluable!”

Barrett, a 1986 NCNM graduate, notes that many of his fellow alums from the ‘80s and ‘90s can’t imagine how the NCNM naturopathic education has changed—and progressed—compared to when they were in school. “It’s just unrecognizable,” Barrett says, “in terms of the level of development, the knowledge and professionalism our faculty bring to students today—NCNM has a campus now—not to mention a campus clinic! We’ve made great strides.”

Barrett has dreams of more. “I can definitely see a time when NCNM has its own Sim Lab,” he says. “I’d love to see us with the capability of offering this to all our ND students—as a required course. I definitely see this in our future!”