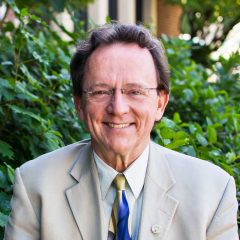 PORTLAND, Oregon (Sept. 6, 2018) — National University of Natural Medicine (NUNM) President David J. Schleich, PhD, has announced his plans to retire July 1, 2019. During his tenure, NUNM has undergone a period of growth and transformational change, becoming one of the nation’s foremost leaders in integrative natural medicine education, clinical care and research.

The NUNM Board of Directors announced that a search is underway for his successor. It is anticipated that Schleich will assist the new president through the transition.

Appointed president of the institution in April 2007, Schleich took the helm of what was then National College of Natural Medicine (NCNM), a medical school that offered two accredited postgraduate degrees—its flagship programs of naturopathic and classical Chinese medicine. Since then, he has presided over the roll-out of nine more degree programs—including three new undergraduate offerings that have created increased enrollment, while the school has achieved a worldwide reputation for excellence in natural medicine education and research. During Schleich’s tenure, NUNM’s Helfgott Research Institute has received more than $3.35 million in research grants from the National Institutes of Health.

It was also under Schleich’s watch that the institution launched a campus master plan, built the school’s first on-campus health clinic, and opened a number of health clinics throughout the Portland metro area. Schleich also helped usher in NUNM’s first major donations for capital campaigns and other campus improvements, including those from locally known philanthropists Bob and Charlee Moore of Bob’s Red Mill, the Zidell family, and philanthropic foundations such as the MJ Murdock Charitable Trust and Meyer Memorial Trust.

In 2016, Schleich supervised the institution’s rebranding as National University of Natural Medicine to reflect its university status.

“David has been instrumental in guiding NUNM to prominence,” said NUNM Board of Directors Chair Willow Moore, DC, ND. “He was the perfect leader to propel our institution forward. He has a unique combination of skills and a deep breadth of knowledge that one can only hope to find in its academic leader—he is both an innovator and a scholar. But above all, David is a visionary. And he has been unrelenting in bringing his vision of a world-class university to fruition during his tenure. We will remain forever grateful for his unflagging dedication to NUNM, to the integration of the profession of natural medicine into the broader context of health care, and especially to the continuing success of our students and graduates.”

Moore noted that Schleich stepped into his role as president at a particularly tenuous time in the school’s history. “The legacy David will leave behind is particularly impressive when we remember that the school had just recently emerged from an extended period of difficulty prior to his appointment as president,” she said. The history of NUNM dates back to its founding in 1956 as National College of Naturopathic Medicine—a time when allopathic medicine assumed a primary role in the lives of Americans, supported by the increasing development of pharmaceutical medicine and innovations in healthcare technology. The decline of the naturopathic medicine profession had brought it teetering on the brink of extinction as naturopathic medical schools closed their doors throughout the country. NCNM was the sole hold-out. From its beginning, NCNM had a dedicated cadre of administrators and faculty who were gifted physicians, clinicians and teachers, but inexperienced as college administrators. NCNM had a tumultuous history marked by monetary mismanagement and hardship until the early 2000s when a seasoned college administrator, President Emeritus William J. Keppler, PhD, stabilized NCNM financially and began to turn the tide of fortune in NCNM’s favor. The small, private school was still largely unknown. When Keppler retired as NCNM president, he tapped the Canadian-born and bred Schleich as his successor.

A nationally recognized expert in the professional formation of natural medicine, Schleich joined the school after a distinguished career in higher education. Prior to joining NUNM, Schleich was president of Truestar Health in Toronto. Before that, he served as president and CEO of Canadian College of Naturopathic Medicine (CCNM) in Toronto. Prior to CCNM, he held a series of increasingly significant academic positions: academic vice president of Niagra College (Ontario); administrative and faculty positions at St. Lawrence College (Ontario), Swinburne University (Melbourne, Australia), and the University of Alberta (Canada). His academic career spans more than 40 years in elementary, secondary, college and university settings.

For information about the presidential search, please visit nunm.edu/president.