At NUNM, we celebrate Chinese New Year in a big way. Between dragons roaming our halls, special teas being poured and acrobatic dances, we know how to ring in the Lunar New Year on a high note. Join Heiner Fruehauf, PhD, LAc, as he explains the Chinese New Year, the Year of the Earth Pig, and how it relates to classical Chinese medicine. 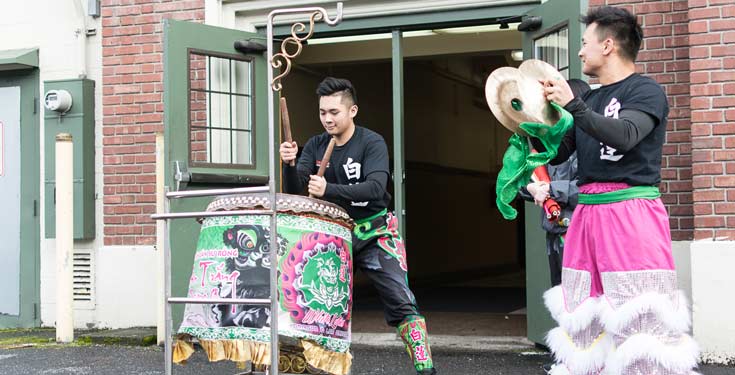 What is the History and Significance of the Chinese New Year?

The Chinese New Year, like New Year rituals in most traditional cultures, is a shamanic celebration to make sure that nature will wake and be reborn, and that spring will come again. One of ancient humanity’s biggest fears was that the sun wouldn’t return in the spring, leaving early peoples in eternal darkness and winter. Thus, in Chinese culture the New Year has traditionally been a ritual of gratitude for the end of winter and a celebration for the return of warmth, taking place at the first new moon of the year. For the last 2,000 years, that first new moon has occurred between mid-January and mid-February.

The Chinese Zodiac and Chinese Medicine

The wisdom of Chinese medicine says, “You go with nature, you will thrive. You go against nature, you will suffer.” And so was born a way to look at the natural world, of which humans are a part. The ancient Chinese understood nature, and by extension their world, as cyclical. They recognized the cycles repeated in hours of the day and months of the year, as well as more complex rotations originating in the 12- and 60-year cycles of the zodiacal universe.

The Chinese zodiac features 28 stellar constellations that are organized in 12 houses, which are similar to the 12 astrological signs described by the ancient sky-watchers of Sumer, Egypt, Greece and Rome. Viewed from the northern hemisphere, these 12 constellations appear to be arranged like numbers on a clock around the central asterism known as the Big Dipper. As the Dipper rotates in the center, its tail “points at” different positions on the heavenly clock face. Almost every culture in the northern hemisphere bases their agricultural year on the positioning of the Dipper, and the correlating position of the sun in the zodiac. The calculation of the 12- and 60-year cycles of the Chinese calendar also include the orbit of Jupiter, approximating 12 years in length, and a hypothetical position opposite Jupiter called Taisui (Counter-Jupiter). For 2019, Taisui’s position on the heavenly clock is marked by the sign of the Pig, making 2019 the Year of the Pig.

What Does the Year of the Pig Mean?

To understand the yearly cycles of the Chinese zodiac, it’s helpful to understand how these cycles manifest in both the months of the year and hours of the day, as well as their symbolic description by the ancient Chinese.

In the system of Chinese medicine, everything is described in terms of the movement of qi―the life force and energy that rules the macrocosm at large, as well as the microcosm of the human body. Nature’s qi moves in cycles: expanding and contracting; working and resting; flowing and stilling in predictable patterns throughout the day and the year. During the day, the ancient Chinese recognized 12 distinct periods of qi (lasting two of our modern hours each), and ascribed the personality of different zodiac signs to each. From the early morning hours attributed to the wakeful energy of the rabbit, to the midday hours assigned to the industrious horse. Similarly, months of the year were also assigned zodiac representations.

The Year of the Pig incorporates the ideas of the evening hours and the month of November. Broadly, this year invites you to rest and restore.

In addition to the 12-year zodiac cycle, the ancient Chinese recognized an additional 60-year celestial cycle associated with our planet’s five phases, described by the elements of wood, fire, earth, fire, metal and water. So each year of the zodiac is modified slightly by an element. This Year of the Pig is associated with the element of earth. Earth means balance and, seasonally, it signifies a transition from summer to fall. The earth pig is a harmonious combination, as the restful, restorative energy of the pig is complemented by the harmonizing, balancing earth element. The earth pig celebrates calm, abundance and tranquility.

Health and Wellness During the Year of the Pig

Chinese medicine invites you to be more aware of the cycles of nature, the energy in your body, and the world around you. What is nature doing from 9 to 11 p.m. or in the month of November? It is a time of stillness and slowness. Everything goes inward, nourishes itself and goes into a state of restoration. The pig is a symbol of that restful, peaceful energy. Just consider, pigs are perfectly happy not doing much of anything―laying around, sleeping. But, while the pig appears to be doing nothing, they’re really doing many things―growing fat, making piglets―that are simply invisible to the eye.

And while rest doesn’t seem like a productive way to spend a whole year in our modern culture, in resting, you too will be doing things within yourself that are invisible to the eye, preparing for the more active energy of years to come.

This concept is so essential that the Chinese call the practice wuwei, which translates into non-action or no action. 2019 is a perfect time to let go and incorporate more being and less doing—wuwei—into your life.

On the other side, finding oneself out of synch with the sleepy energy inherent in the Year of the Earth Pig can bring restlessness (i.e., anxiety or insomnia). Modern society often ignores the need to recharge and encourages us to push through tiredness with drugs like caffeine, which can disrupt the resting cycle of qi―we’re great at getting energy up, but bad at creating space for our qi to return inward and truly rest.

As the Year of the Pig creates a yearlong invitation to a restful life, those that fall out of sync with this phase, who continue to push and strive and try to maintain constant outward energy, may feel anxiety or frustration bubble up as a signal of their disconnection from the natural world.

4 Things to do in the Year of the Pig