North vs. South: Burnside Street is the dividing line between north and south Portland.

Street Names: In most cases roads running east to west are “named streets” and “numbered avenues” run north to south.

One-Way Streets: Portland has a number of 1-way streets (mostly in downtown). However, once you realize there is system it becomes much easier to navigate.

Turning on Reds: Oregon law does allow for turning right at a red light. As well as, turning left at a red light onto a 1-way street. Please just make sure to observe street signs and contact the DMV for up-to-date laws and information.

Quadrants:  Whether apartment hunting, looking for a yoga studio or the best brunch place in town, it helps to know the five quadrants of Portland. The Willamette River separates the west from the east—while Burnside Blvd divides the north from the south. North Portland’s boundary is east of the Willamette River, south of the Columbia River and west of Vancouver Avenue.

Each address in Portland will be designated with one of the five directions. So pay close attention or you might be on the wrong side of the river. Tip: These quadrants can and do include outer Portland suburbs—so even if an apartment is listed in SE Portland, ask if they’re within the city limits.

To/From Portland International Airport: Taking a taxi to the airport you can expect to spend around $30.00, have a friend drop you off and depending on the time of day be prepared to sit in commuter traffic. Or, you can go the easier route and take public transportation! The Red Line of the MAX travels between Beaverton, through the city center, and drops you off at Portland International Airport.

Having a large river run through the middle of town, creates the need for a few bridges. Portland has so many bridges that one of its nicknames is “Bridgetown.” The trick is remembering which is which and the best route to take to cross the bridge – most of that takes practice and learning which streets are one way only. For now here’s a list (south to north) of the bridges that cross the Willamette River and what major roadways that connect to them. Bridges that stop car/pedestrian traffic to allow for boat traffic are marked with an asterisk (*); this can delay you for a while, so if you’re in a hurry find an alternate route

Sellwood Bridge Is reachable via Macadam Avenue/ Hwy 43 on the west side of the river and touches down in the Sellwood neighborhood on the east.

Tilikum Crossing is the first major bridge in the U.S. designed to for pedestrians, bikes and transit vehicles, but not cars.

Marquam Bridge is double-decker and carries I-5 over the river just south of downtown Portland.

Hawthorne Bridge* connects Hawthorne Blvd on the east side with Madison Street on the west and is a great bridge to walk or ride your bike across.

Morrison Bridge* has sidewalks on both sides of it for pedestrians and connects Morrison Street to both sides of the river. Also there are ramps for I-5 and I-84.

Steel Bridge* is both a rail and automobile bridge – trains/sidewalks on the lower deck and cars/MAX rail on the upper deck. The lower deck of the Steel Bridge connects the East Esplanade with the Waterfront Park and is an excellent biking/walking/running route.

Broadway Bridge* connects Broadway Street to the east/west sides of the river and has two lanes of traffic in each direction and wide sidewalks for pedestrians.

Fremont Bridge is another double-decker bridge, with four lanes on each level, that carries I-405 and US-30 from one side to the other

St. John’s Bridge is the city’s tallest bridge and the only suspension bridge in the Willamette Valley. This bridge connects the industrial area in Linnton to the St. John’s Neighborhood north of downtown Portland. 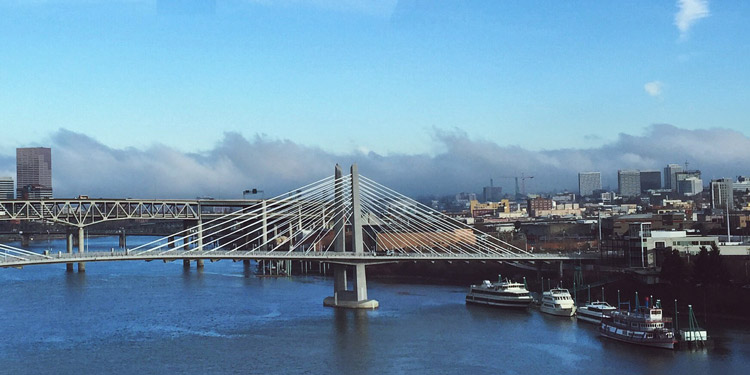 Some folks don’t think that the Pacific Northwest has much of an accent…one thing for sure though—learn to pronounce these words correctly or be pegged as an out-of-towner!

Glisan Street: Is the street with two pronunciations, on the west side it is “glisen” but on the east it’s “GLEE-sen” Street. Use it correctly and impress an old-timer.

Timberline: Don’t soften that “I” make sure to say “timber-line”

Aloha: Unlike the Hawaiian pronunciation this is “a-LO-a”

The Sunset: A nickname for a portion of the U.S. Route 26 that runs from the coastal city of Seaside to the I-405 interchange in downtown Portland.

The Couv: The Interstate Bridge where I-5 crosses the Columbia River

The Banfield: Is referring to I-84

The River: Even though there are a few rivers that run through and around Portland it’s the Willamette River that will often just be referred to as “The River”.

Pill Hill: Oregon Health Sciences University is located on “the hill” South of Downtown Portland. The entire area is often referred to as “Pill Hill”

OMSI: (pronounced AHM’zee), is the Oregon Museum of Science and Industry (and fun for all ages).

The Pearl District: An area on the north side of Burnside, west of the Willamette River. Well known for luxury condominiums, great restaurants, and one-of-a-kind shops. On the western edge is Powell’s Bookstore, famous for their amazing collection of books.

Portlandia: Before it was a TV series on IFC, Portlandia was known to all as the statue on SW 5th. She’s the 2nd largest copper repoussé statue (behind the Statue of Liberty).

Pod: A group of food carts. Portland has over 200 food carts and most of them are clustered into “pods”.

SOPO: The area between SE Foster and SE Powell.