Benedict Lust, the Father of Naturopathic Medicine, and Author John Weeks are Honored

PORTLAND, Ore. (June 17, 2015)—John Weeks, renowned author and staunch advocate for integrative medicine and health care, will deliver the keynote address to the 2015 National College of Natural Medicine graduating class at the medical college’s commencement ceremony to be held Sunday, June 28, at the Oregon Convention Center. Weeks will receive an honorary Doctor of Letters degree for his longstanding work in advancing the integration of the fields of natural medicine and conventional Western medicine. 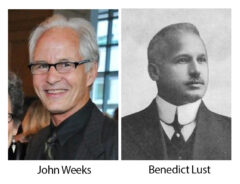 Also being honored at the ceremony is the family of Dr. Benedict Lust (pronounced LOOST), who is widely recognized as the Father of Naturopathic Medicine in the U.S. for his pioneering work in the early 20th century to establish the profession in this country. John Benedict Lust, Lauren Lust Proctor and Helen Lust Ebers will be awarded the 2015 NCNM Presidential Medallions for their lifetimes of work in carrying Lust’s legacy forward for generations of naturopathic practitioners.

NCNM will also award a posthumous Presidential Medallion this year to the late Brent “Chris” Green, an Iowa attorney who valiantly spent the last few years of his life as a leader in the state effort to lobby the Iowa State Legislature for its approval of naturopathic licensure.

NCNM continues its tradition of celebrating graduates and their families with activities and events leading up to the weekend commencement ceremony. Portland’s Cambia Health Solutions’ Chief Innovation Officer and NCNM Board Director Mohan Nair will be the featured speaker at NCNM’s annual Min Zidell Garden Gala, held in its campus herbal garden on Friday, June 26 at 5 p.m. Nair’s address, “Personal and Business Transformation in the World of Unknown Unknowns,” is the centerpiece of the NCNM Garden Gala theme, “Celebrating Unsung Heroes.” All proceeds from the event will benefit NCNM’s Capital Campaign to build a new campus library for the college’s expanding enrollment.

Weeks is publisher and editor of the respected online resource, The Integrator Blog News & Reports, a leading news source of policy, business and academic issues concerning natural medicine and its growing intersection with Western medicine. He is a regular columnist for The Pain Practitioner and The Huffington Post. His work is widely referenced by other publications, such as Newsweek, Modern Healthcare, Hospitals & Health Networks, The New York Times and The Boston Globe.

In addition, Weeks has been an executive in the field for over 20 years, including providing foundational contributions to the White House Commission on Complementary and Alternative Medicine policy, the National Institutes of Health, the World Health Organization, the American Hospital Association, the American Association for the Naturopathic Physicians, Providence Health System and the National Managed Health Care Congress, among others. Most recently, he served for eight years as executive director of the Academic Consortium for Complementary and Alternative Health Care, a post from which is he stepping down at the end of June.

Weeks’ award is richly deserved, NCNM President, David J. Schleich stated. “John understands the historically, deeply entrenched complexities of interprofessional relationships, like those within the natural medicine and Western medicine fields. We have come to not only look to his insights and analyses, but also to trust them. As John approaches retirement, we at NCNM are compelled to recognize his selfless and tireless service on behalf of the natural medicine professions.”