It took a while and a go at other professions, but NCNM Librarian Noelle Stello has found her calling. 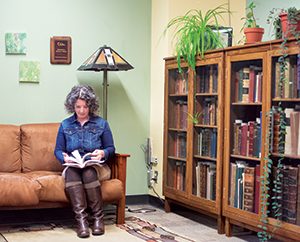 Rows and rows of shelved books towered like mountains over her, forming passageways that seemed like they could hide a secret tunnel or some other wondrous discovery. To one side, a kindly librarian presided, ever ready to help a young dreamer with her questions and book explorations.

When Noelle Stello was about five years old, she relished the frequent visits with her mom to the Salem, Oregon, public library. They didn’t have a TV or much money, so the library was a favorite form of entertainment. Stello, NCNM’s head librarian, later spent plenty of time in other libraries while working as a freelance researcher and studying for her bachelor’s degree in chemistry from Grinnell College in Iowa.

But, despite the childhood experience and a general fondness for libraries, Stello didn’t immediately think of the library as a career. First, she parlayed her bachelor’s degree into work as a research and development chemist for a pharmaceutical company. Always interested in health care, Stello enrolled in the Oregon School of Midwifery in Eugene, Oregon. But during the move from Chicago to Eugene, her husband was killed in a car accident. She decided to return to Oregon anyway where she still had family. However, in her last year of study at the midwifery college, an apprenticeship experience made it clear that wasn’t what she wanted to do after all.

Still seeking her way, Stello worked with a life coach who reminded her of that early library joy. With a renewed interest in libraries, she enrolled in a library science master’s program at the University of Illinois Urbana-Champaign. During her studies she met Dolores Judkins, the head reference librarian at Oregon Health & Science University, and spent the next two years working in two of OHSU’s library departments: the reference and historical collections. Judkins, said Stello, “Took me under her wing and just kind of brought me along. I got sucked into medical librarianship.”

Everyone needs a mentor, but Stello was lucky enough to find two. New degree in hand, she joined the NCNM library in 2005 as the associate librarian under long-time Library Director Dr. Rick Severson. “It was the perfect job for my background,” she said. “Rick was a great mentor. He pushed me into learning a lot of new things.” Severson was a jack of all trades, she said, and freely shared his top-to-bottom knowledge of the library.

When Severson retired in 2014, Stello got the nod, and with a staff of three, oversees a collection that has grown to some 17,000 volumes, including 1,500 rare volumes on naturopathic and herbal medicine donated by Michael and Simone Chilton. The library’s electronic databases have grown significantly in recent years too, said Stello. Altogether, the NCNM Library is one of the largest and most unusual collections on natural medicine in the United States.

Even so, she said, with new programs and enrollment growth, “The library is bursting at the seams. I don’t remember seeing it so full; it’s getting increasingly crowded.” While she likes the energy and thinks it’s great that people are using the facility, she hopes it won’t be too long before NCNM builds a new library to better serve its constituents. In the meantime, Stello and staff are brainstorming ways to save space, including housing some volumes outside of the library.

Since taking over as NCNM’s college librarian, Stello has also been busy hiring staff and working on a number of electronic initiatives, including launching a new website and catalog system. The latter required switching data vendors, a major effort that involved extracting all of the library’s existing data and moving it to a new system. “It was fun,” she said, “when we weren’t pulling our hair out.” Going forward, Stello has made it a priority to ease access to library information both on and off campus, including access to more full-text electronic resources.

So the little girl in the Salem library has come full circle. She’s remarried now and has two stepsons, ages 19 and 12. But one thing remains the same: “I like learning new things about people and places. Whenever I start feeling a little stale, it’s time to do something new.”