A love of plants and animals—and the teachings of Sun Simiao—lead to a vibrant life of teaching and scholarship. 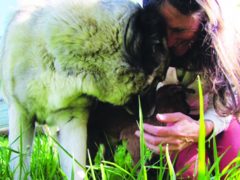 As a girl growing up in Bavaria, Germany, Sabine (pronounced “SaBEEna”) Wilms, PhD, loved animals and plants. There was just something about raising and tending to them that attracted her and enriched her spirit. Today, as an adjunct professor of Chinese medicine at NCNM, she maintains those twin passions, but along the way has added teaching and scholarship of the ancient texts, which are the basis of classical Chinese medicine.

Dr. Wilms had early exposure to medicine and hospitals. Her grandmother was one of the first female pediatricians in Germany and her father, a professor of internal medicine, was the director of the Julius Maximilian University Hospital in Würzburg, Germany. She worked in the hospital as a youth and saw how draining the work there was on the doctors, an experience that initially turned her away from medicine.

Things began to change at age 18 when she was fresh out of high school. Eager to get away from home, she traveled to Taiwan to learn Chinese. There, she was exposed to Chinese philosophy and culture, and studied modern and classical Chinese language at Tunghai University in Taichung and Fu Jen Catholic University in Taipei. Chinese philosophy “just made sense,” she said. Also, since she is shorter than most Germans, Wilms recalled with a laugh, “I fit right in.”

From Taiwan it was on to the University of Arizona to explore East Asian studies, including early Chinese thought and religion, Japanese religion and Chinese archeology. It was while continuing her studies in Arizona’s East Asian Studies doctoral program that she made a life-changing discovery: the writings and philosophy of the revered physician Sun Simiao.

Often called the “King of Medicinals,” Sun lived in the latter half of the 600s and died during the Tang Dynasty in A.D. 682. His 30-volume “Prescriptions for Emergencies Worth a Thousand Gold,” is one of the seminal texts of ancient Chinese medicine. Wilms was struck by Sun’s admonishments to avoid the influence of rewards and notoriety, to treat patients equally regardless of rank, wealth, age or gender. “Sun Simiao serves as the perfect representative of a vision of medicine and healing that is so much bigger than our current Western medical boundaries allow,” she said. “That starts with self-cultivation and ends with harmonizing the macrocosm with the microcosm of the body through ‘nurturing life.’”

For instance, Wilms explained, Sun emphasized the central role of women in the health of the family. Gynecology and childbirth are covered extensively in his writings, with an emphasis on comfort, balance and adequate recovery time after giving birth. In the West, she noted, women are expected to suffer and often don’t get enough time after the birth of a child to renew and revitalize. 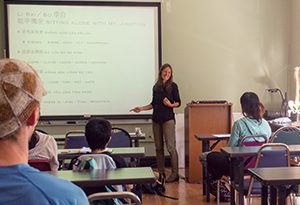 At NCNM, Wilms is an adjunct professor who teaches introductory courses on classical Chinese texts, classical gynecology, and classes on the history and culture of China. Outside of teaching and public lecturing, she can be found at home in Corbett, Oregon, working in her garden or tending goats and chickens. More recently it was a batch of puppies. Before Wilms came to Portland, she ran a goat farm and orchard for five years in Taos, New Mexico. The farm, called Happy Goat Productions, sold goat cheese and milk, vegetables, apples and honey.

Wilms once saw her plant and animal passions as separate from her academic work. Slowly though, she began to see them as harmonious with the philosophy of the “dao of nurturing life” (yang sheng zhi dao 養 生之道) she has adopted. “Somehow, I realized that I’m teaching fertility. That’s what I do (when I) farm. The two just came together.”

These days Happy Goat Productions is plowing literary fields. Her farm has morphed into a publishing house with several titles for sale reflecting her Chinese medicine expertise, including “Venerating the Root,” her translation of the first half of Sun Simiao’s writings on pediatrics, and “Let the Radiant Yang Shine Forth,” “a translation of Liu Yousheng’s lectures on virtue. In classic Sun style, Wilms’ works aren’t intended to bring fame or riches, but are a fulfilling endeavor that extends her teaching.

“I write books for myself,” she said. “It’s not a money venture. It’s a really small market and I want to write whatever I want and not worry about profit.”

You can almost imagine the master smiling and nodding.