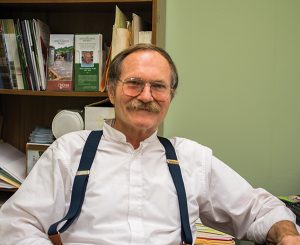 If Bill Tribe collected all of the hats he’s worn at NCNM, he’d have quite an assemblage of figurative fedoras by now. He also helped found the American Association of Naturopathic Physicians and the Council on Naturopathic Medical Education, rather sizable feathers in those caps.
Tribe, now NCNM’s alumni officer, was a naturopathic student for two years from 1977 to 1979 when the then National College of Naturopathic Medicine had a branch in Kansas. He came to Oregon in 1975 when the Kansas branch and another in Seattle closed, consolidating operations in Portland. (See Editor’s Note, below)

However, his interest in natural medicine goes back to his undergraduate days at Middlebury College in Vermont. As Tribe tells it, his roommate was “a macrobiotic freak,” and introduced him to a range of whole foods and natural approaches to life. His roommate also told him about “Back to Eden” by Jethro Kloss, a book on natural food, medicine and herbal remedies. “I got really fascinated with that and wondered how to apply it, and about the biology and chemistry of how herbs work and why.”

He reviewed the chemical and biomedical literature on about two dozen herbs and wrote a series of monographs on his findings. Shortly after, he won a fellowship from the Thomas Watson Foundation to work with the National Institute of Medical Herbalists in Great Britain to study the role of medical herbalism in modern British society. It was while studying in the UK that he read about NCNM and enrolled.

However, “it was somewhere in my third year (that) I realized I was not cut out to be a physician,” he said. While he enjoyed the research and scholarship, he found he wasn’t fully comfortable interacting with patients. “But I had a great passion for the school itself and for natural medicine in general,” he said, “so I kinda hung around and created a job for myself.” He served as assistant to the academic dean, dean of students and as development director. He even served a year as interim president.

In 1981, though, he and NCNM parted ways. “The board decided they needed something else and I walked away from NCNM for a while.” In the interim, he was the first executive director of the Council on Naturopathic Medical Education (CNME) and served for four and a half years as volunteer executive director of AANP, which he and a group of doctors, including NCNM alumnus Jim Sensenig, ND (’78), started in 1985.

Ten years later, he was back at NCNM working on another couple of caps. Initially, he coordinated the writing and publication of the school’s first CNME self-study, a successful effort in the process of securing NCNM’s first accreditation. That job morphed into a position as special assistant to NCNM President James Miller. With NCNM’s first accreditation complete, he left NCNM again, this time to work with his wife on their Corbett, Oregon, daffodil farm. That lasted for 15 years, but he never completely lost contact with the college.

So one day in 2012, Tribe heard that NCNM was looking for a new alumni officer. Now retired from daffodil farming, he called Advancement Vice President Susan Hunter and told her, “You need to hire me.” She did, and he added one more hat to the collection. “It’s great,” said Tribe, “I like to say that I was rescued from retirement to continue my 40-year love affair with this place. I really enjoy being in contact with alumni and fostering a personal relationship.”

He added, “When you drill down to the bedrock of it all, there is something fundamentally right about what the natural medicine profession does. I want to be part of the excitement in expanding that. My object has always been to be useful.”

Editor’s Note: NCNM was founded in Portland in 1956 and has always had a presence there. In the 1970s the school had two short-lived branch campuses, one in Kansas and one in Seattle.