NUNM’s SIBO Center offers analysis and results for the SIBO Breath Test to physicians and patients throughout the United States. In addition, NUNM’s team of naturopathic doctors, acupuncturists and student interns are available to serve patients and their individual SIBO needs with a holistic approach.

SIBO Center’s Steven Sandberg-Lewis, ND (’78), discusses gut health as it relates to SIBO. Want to learn more about SIBO? Sign up for their newsletter and visit the SIBO Center website. 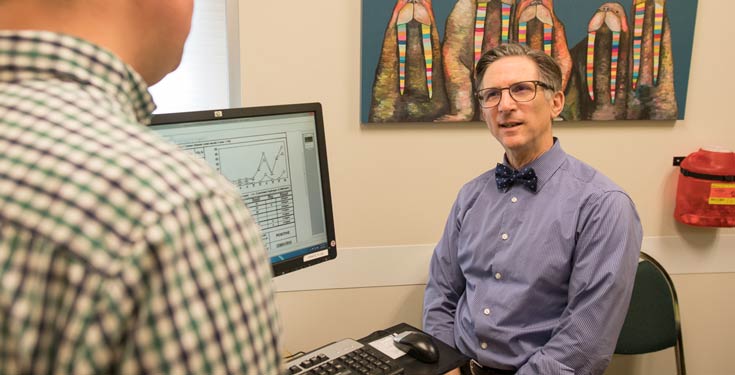 If you have been testing and treating SIBO on a regular basis, you know that it is not a simple condition to solve in many cases. Considering the central position of the enteric flora in the digestive and absorptive small intestine (“the small intestine is not small”), many autoimmune and degenerative processes originate or progress with SIBO. Over forty associated diseases have been enumerated. Breath testing and duodenal aspirate culture for SIBO have been available since the latter half of the last century. It is not a new diagnosis, but as many physicians have recently started to focus on it, some common misconceptions have developed. Below are several I run into often.

“SIBO can be diagnosed with a urinary organic acids test.”
Many key metabolites are measured in these tests, but the origin of the organic acids can’t be determined for fungal or bacterial markers in the urine. They may be in the large or small bowel. There is also no delineation of bacterial vs archaeal (methanogens) from these tests so the type of organism and therefore the proper treatment strategy cannot be known.

“SIBO needs to be treated over and over in order to be controlled.”
What I and others have found is that when a full analysis of the underlying causes of a patient’s SIBO has been done, often there are conditions that can be resolved or at least well treated so that SIBO does not relapse or relapses are very infrequent. I also have seen that the optimal individualized diet can reduce symptoms by 60-80% and occasionally there is complete relief of symptoms with the right diet. If the patient is compliant with the diet, there is often no need to undertake repetitive antimicrobial treatments. Whenever possible, I try to have the patient slowly expand the diet, one at a time, testing foods with higher fermentation potential. I have them reintroduce these after the first month they have seen significant reduction in their symptoms.

“Herbal or prescription anti-microbial treatments as well as a low FODMAPs or similar type low fermentation diet are the proper treatment for SIBO.”
Most of the underlying causes of SIBO are related to a less than vibrant migrating motor complex (MMC) of the small intestine. For this reason, some sort of prokinetic treatment is needed during the prevention phase. The MMC is typically bolstered for at least 3 months of the prevention phase. In the case of elevated levels of antibodies to cytolethal distending toxin (CDT-B) and/or antivinculin antibody (AVA), I recommend a prokinetic for years. Dr. Siebecker and I have often been referred patients for SIBO treatment that were properly treated except for the omission of this final preventive step (prokinetics plus diet).