Most people think of needles when the word acupuncture is mentioned. However, there are many other forms of acupuncture where no needles are used, including non-insertive treatments.  Bob Quinn takes us through the methodology and mechanics of the non-insertive facial treatment, discussing other tools used for acupuncture. Quinn teaches this method to students in the Chinese medicine doctorate and master programs at NUNM.

This non-insertive facial treatment was designed as a key part of a protocol to treat post-traumatic stress disorder (PTSD), evolving after the 2011 tsunami in Japan. As acupuncturists arrived at the disaster zone to assist, they had to quickly develop ways to treat severely traumatized patients. This facial stroking work proved its value again and again, and became part of a standard protocol for PTSD. It is now also used in cases of anxiety, depression and bipolar disease. The treatment also has the side effect of rejuvenating the face (i.e., making one look younger). 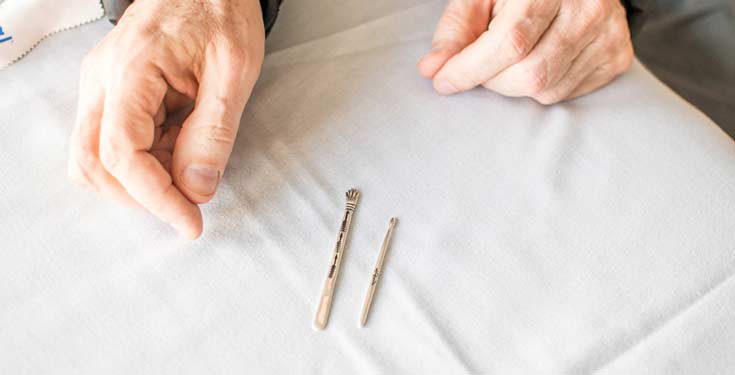 The tools I use for the non-insertive acupuncture treatment are crafted by a master Navajo silversmith in Arizona. He’s acknowledged for the mastery of his work, which is featured in the Smithsonian Collection of Contemporary Native American Art. I believe the reason this technique worked so well with the tsunami PTSD patients can be explained from what is known about the vagus nerve. The vagus, one of the cranial nerves, has been identified in the research of Stephen Porges as a key player in the recovery from trauma.

I touch the teishin instrument gently over the scalenes and the sternocleidomastoid muscle (SCM) muscles in the neck –this is because the vagus nerve actually runs right over the SCM. There is easy access to the vagus nerve here in the neck, and this technique can be used to increase “vagal tone,” which invites the body into a profoundly relaxed, parasympathetic state. The vagus nerve controls most of the major organs, including respiration and the heart.

I then use the stroking tool, within the same area I just worked with the first tool, however I now use a different technique and stroke over the areas of tension. Next, I bring the neck back to a neutral position to see what has changed. You may not expect much from these simple tools, but in fact, they bring great change. 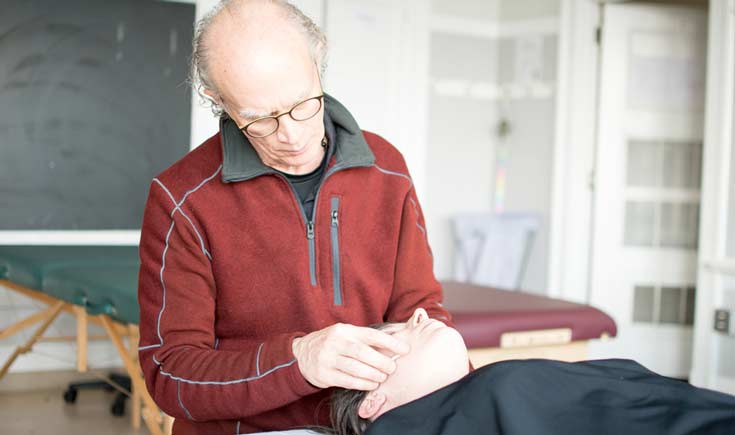 Following that I stretch the skin slightly, creating a subtle tension. On that line of tension, I tap the teishin tool. The teishin is a 2,000-year-old tool dating back to the core medical classic The Yellow Emperor’s Classic of Internal Medicine. There are actually nine types of classical needles described in this book, and the teishin is among them. Today most acupuncturists only use one of those nine types, the normal filiform acupuncture needle.

After working on the neck, I concentrate on the face itself. Here I stroke lightly with the stroking tool from chin to ear (on the face below the eye level) and horizontally straight back to the hairline on the rest of the face. The eyelids are also included in the stroking, a technique that is wonderfully relaxing.

The muscles and skin of facial expression all tie back to the brain stem and the vagus nerve. I also stroke through the hair at the end of the treatment as well. The facial skin feels entirely different when it has received this technique and looks much younger. We speak of the “luster” of the skin, a sense of aliveness. This style of treatment dramatically improves the luster, pulling healthy moisture into the skin.

Visually the effect of the treatment lasts 2 – 3 days. The relaxation can last much longer.