NUNM students have many opportunities to explore topics, research and areas of practice that interest them. From broad elective choices to research study participation and self study, our students choose the doctor they want to become. Lauren Sutton, naturopathic doctoral student, shares her research and perspectives on supporting reproductive health with black cohosh. 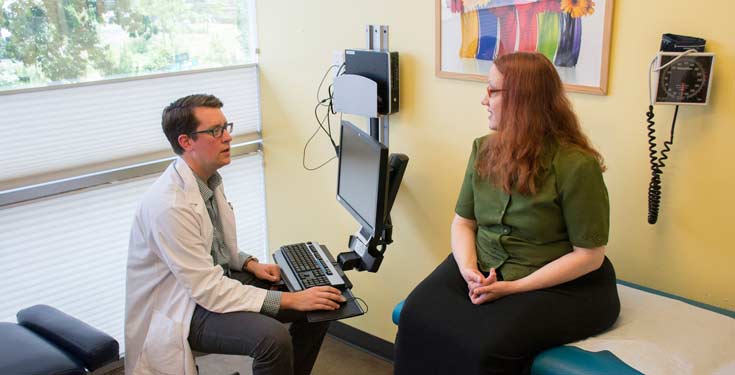 Actea racemosa is also known as black cohosh, black snakeroot, squawroot, radix, farin, bugbane, rattleroot and rattleweed.[1] The herb was formerly known as Macrotys racemosa, a name given by French botanist De Candolle, meaning a large bunch.[2] This European species was previously used as a bug exterminator, gaining the name Cimicifuga racemosa. The word Cimicifuga being derived from cimex, meaning bed bug, and fugare, meaning to drive away.[2]

Black cohosh is a herbaceous perennial native to the U.S. and Canada, and cultivated in Europe.[2] The furrowed stem of Actea is tall, growing from three to nine feet high with large white flowers that bloom in June and July bringing an unpleasant odor and followed by small ovate capsules containing flat seeds.[3] Each flower contains about one hundred stamens, creating the appearance of a long cluster of flowers.[3]

Black cohosh is known to grow throughout the Midwest to the Atlantic coast, north through the Great Lakes and as far south as Florida.[2] The medicinal aspect of this plant is the root, which is an inch or more in diameter, and has a brownish black exterior with a white center.[1] It is known to have a foul odor when fresh that remains unpleasant when dried.[3] When ingested the taste is somewhat bitter and the leaves leave an acrid sensation on the tongue.[3]

Known as Macrotys racemosa by the early Eclectic physicians, this plant was a known favorite of John King.[4] King was a leading Eclectic physician of the time, specializing in obstetrics and gynecology and serving as Professor of Obstetrics and Diseases of Women in the Eclectic Medical Institute of Chicago.[4] The herb proved to be potent and helpful in ailments related to the female reproductive organs.[4] King stated that he found it especially useful in cases of “chronic ovaritis, endometritis; menstrual dysfunction, sterility, and to relieve severe after-pains.”[4]

Eclectic practices were well summarized in the Lloyd Brothers Drug Treatise on Macrotys. It was one of the best known of the Specific Medicines of the time and proved to be so effective that it was considered to be one of the essential remedies to carry, if restricted to a only a half-dozen remedies.[5] They also noted the herb’s affinity for the female reproductive system including “the unpleasant sensation in the pregnant uterus; for false pains, and to aid true ones”, and noting its wide range of usefulness in female reproductive complaints. It was believed to have a special influence on menstrual disturbances, and a strengthening of normal functional activity.”[5]

Black cohosh was also known to be a valuable aid in pregnancy and birth. It was a treasured partus preparator, used when women were troubled with disagreeable sensations in the last months of pregnancy.[5] The herb was given alone or included as the chief ingredient in a Mother’s Cordial during the last six or seven weeks gestation.5 The herb was found to be helpful in relaxation and dilation of the cervix, strengthening uterine tone and contractions and shortening labor.[5] It was also equally valued as a partus accelerator, used to accelerate the frequency and force of pains when appropriate and relieving the discomfort of false pains.[5]

Modern use of this herb mirrors its historical past. Common ailments currently treated by black cohosh include menstrual dysfunction, cramping pain in the uterus, labor, menopause, and many others.[1]

Although minimally noted in the Eclectic literature, black cohosh contains some potentially toxic constituents as well. Excessive use can lead to some of the very same complaints that the herb is hailed to treat, including pain in the joints and in the limbs.[1] Current use practices caution against the use of the herb in the first trimester of pregnancy. Other contraindications include use of this herb while breastfeeding and with active cancers.[1]